Affiliate Disclaimer: Some of the product links on this page are affiliate links. We may recieve commission if you purchase something after using one of these links, but using these links will never affect the price you pay.

Update – Logitech has released a new version of the G29, called the G923. You can read our full review of the Logitech G923, and why it’s better than the G29 here.

The Logitech has been around for quite a bit of time now, and it has stood the test of time well. For the past five years, the G29 has had a good grip on the “My first racing wheel” consumer.

It positioned itself early on as the most consumer-friendly and budget-friendly racing wheel. And the reputation that Logitech had previously built with the G25 and G27 as a good quality, low-cost racing wheel manufacturer remained.

But come 2020, five years after its initial launch. Does the Logitech G29 still remain the king of entry-level racing wheels? We have owned a G920 for almost five years, and it’s been in regular rotation in our sim rig since day one.

Using this knowledge and our experience with other racing wheels, we give you our expert review of the Logitech G29 / G920. 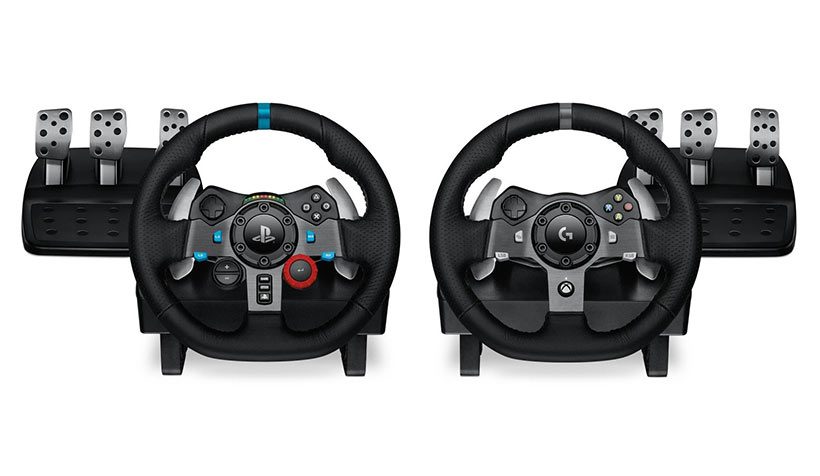 Ultimately, they are gear driven racing wheels, which are designed for an entry-level sim racer audience. They certainly won’t win any awards for their force feedback when compared to some of the more expensive sim racing wheels. But that isn’t the point of these products.

That is the crowd that these two racing wheels are meant for. And with that in mind, Logitech did a fantastic job of achieving what they set out to achieve. Let’s delve deeper and review all aspects of this racing wheel bundle.

We started our sim racing journey way back in the times of the G27. But when the much revamped G29 came out we snapped one up. First and foremost, we thoroughly enjoyed our G27 racing days, so it was natural to want the newer version.

Secondly, we weren’t as invested in sim racing back then. I only owned a couple of wheels, so I was still in that beginner phase. 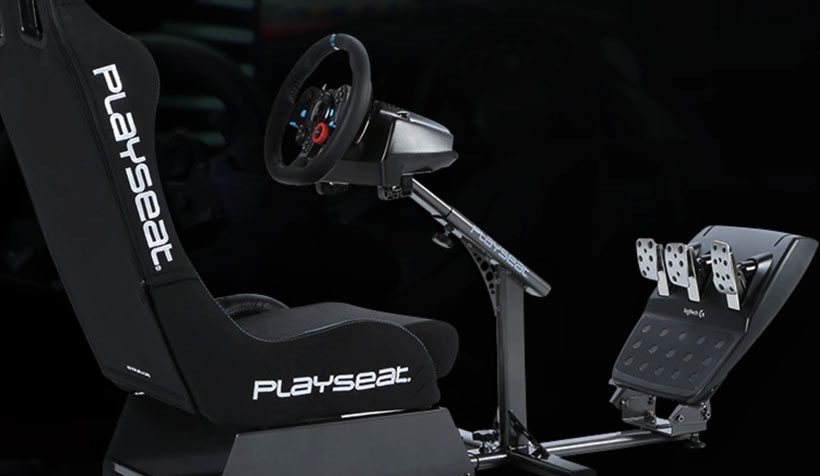 Since buying the G29, we’ve gone on to own and drive with a complete range of racing wheels. From Thrustmaster equivalents, up to the extreme power of Fanatec’s direct-drive racing wheels. But we have always kept our humble G920, and it still gets it’s time in the spotlight from time to time.

As you can see, we’ve spent hundreds of hours racing with this racing wheel. And to be honest, we’ve generally enjoyed our time with it. There are a few areas which we didn’t enjoy. I’ll touch on them later. But all in all it’s a great package for anyone setting out on their racing journey.

Unlike many other sim racing wheels, the Logitech wheels are not customize-able in any way. Unless you start unbolting things, which you really aren’t supposed to! The wheel itself comes firmly bolted onto the wheelbase, and you aren’t meant to change this.

The wheelbase looks, well… Like a wheelbase. There is a lot of plastic, and a few nice design features such as little vents. But other than that it looks just fine. The steering wheel however looks great. for a budget racing wheel, this rim looks remarkably high end. 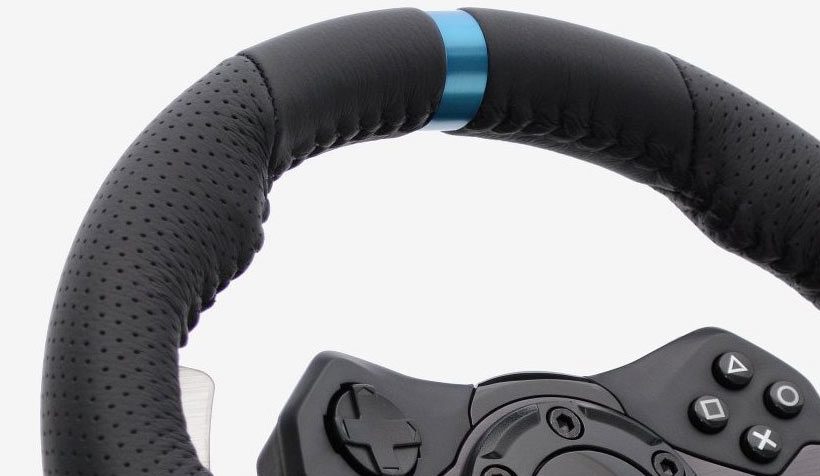 The main body is constructed from metal, and the almost completely round handle is wrapped in real perforated leather. The rim is finished with a flash of metal at the top just like real racing wheels.

The front of the metal body is home to a selection of buttons. Depending on your console these will have the console-specific icons on. The buttons themselves are a little floppy, although they have a satisfying click once pushed all the way back.

There are a couple of metal paddle shifters on the rear of the wheel, which are light and responsive. When you pull them they activate a button with another satisfying click, before springing back into place.

Now, as a G920 user, I’ve always been a little envious of the special treatment that PlayStation owners received. The PlayStation edition wheel, the G29, receives a few nice flourishes that Xbox owners miss out on. These include a series of rev lights on the wheel and an extra rotary dial. 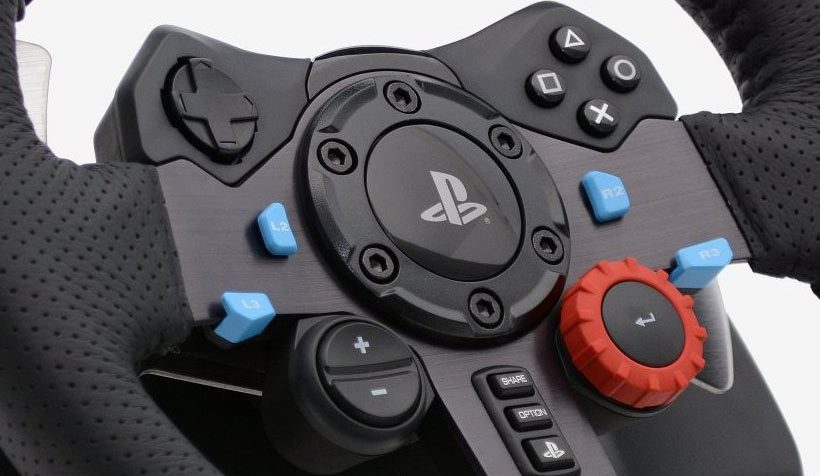 These PS4 exclusive touches really finish the wheel off nicely and give it that racing vibe. These weren’t included on the Xbox version due to restrictions with the Xbox architecture. Meaning Xbox gamers such as myself, miss out.

As a complete package, it looks modern and fresh.

How good or bad is the Logitech G29 force feedback? 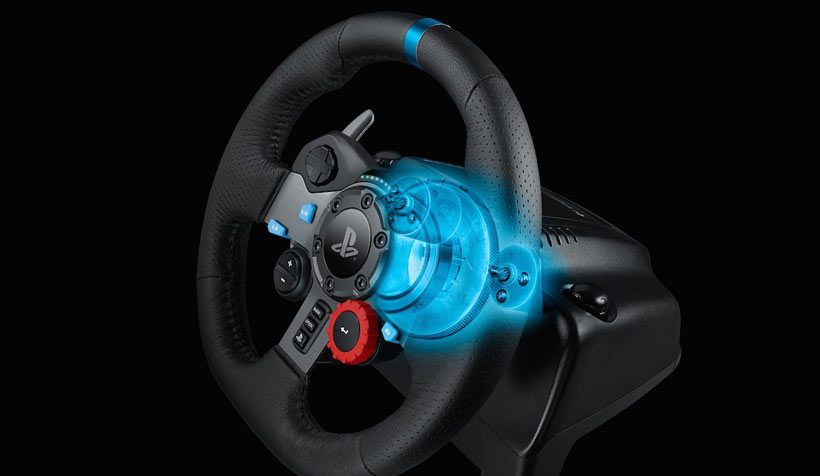 For a beginner, this is enough to give that feeling of driving a real car. There is enough force feedback to portray a sense of immersion that a controller just can’t.

But after spending some time with the G29 or G920, you start to become aware of its downside. Those gears produce a lot of spiking and jumping.

This is especially present when you hit a large bump or rumble strip. The wheel feels like it skips a gear or two, making the car feel light. This isn’t accurate and when you’re not expecting it can catch you out.

This is also a loud wheel to race with. Because there are gears instead of a smooth belt, the noise of the force feedback is ever-present. It’s not loud enough to become annoying but is just loud enough to be annoying for anyone else in the next room.

We certainly wouldn’t recommend this wheel for those nighttime racers!

Much like the main wheel itself, the pedals that come in this wheel bundle are well designed and look the part. They feature a plastic base, with three metal pedals. 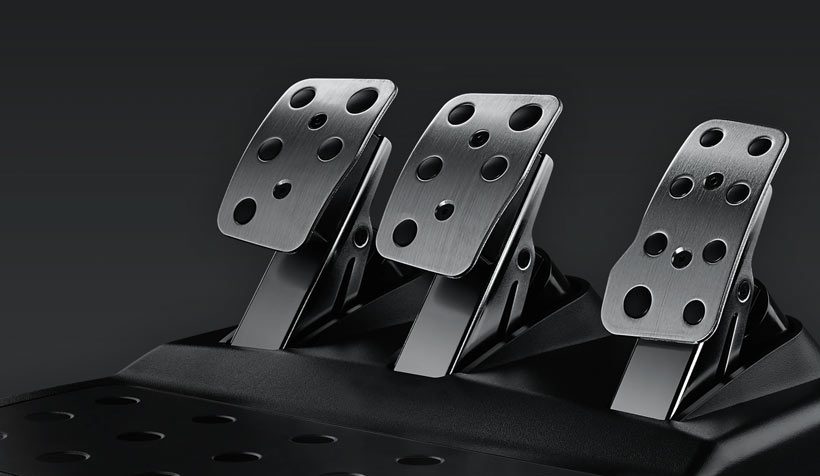 There isn’t much trickery involved with these pedals, as all three use a simple distance-related input method. This determines how hard you accelerate and brake, by how far the pedal is pushed. This differs from a real car which measures how hard you stomp on the brake pedal rather than just how far.

But despite this, these pedals do a good job of allowing you to brake consistently every lap. The brake itself utilizes a resistor giving it a reasonably realistic feel. Essentially the further you push the brake, the harder it becomes to press.

It takes a little bit of time to get used to, but after a bit of practice, you will be able to consistently hit your braking zones.

Unlike a few other starter pedal sets, Logitech is generous enough to include a third pedal. This is great to see, as Logitech also sell an add-on shifter.

The manual shifter itself transforms the racing wheel into something much closer to a regular road car. But much like its racing wheel brother, it also has some flaws. The main one being how weak it is. There is little to no resistance in the shifting at all. You can literally shift with your little finger.

However, we will save the shifter for another review, as it isn’t a part of the standard product bundle.

If you are completely new to sim racing, the Logitech G29 racing wheel is a fantastic place to start your journey. It is almost the most natural way to start.

As you grow as a racer, you will progress from the G29 through to belt-driven wheels and even direct drive wheels further down the line. This progression as a driver, and in terms of hardware will be ever rewarding when you make the next jump up.

If you approach the G29 in the way it is intended, as the first step into sim racing, you won’t be disappointed. The high-quality construction of the wheel itself, and the force feedback adds a level of immersion that pad gamers can’t match.

The G29 / G920 has made many gamers fall in love with sim racing, including ourselves. And for that reason, we would wholeheartedly recommend it to new racers!