Entry-level monitors like the JBL 305P MkII combine affordability and sound quality. 5″ speakers like these are the most popular size for home studios—they have more than enough volume and plenty of low-end extension. We’ll run down the specs in this JBL 305P MkII review, showing you why these are one of the top choices out there.

The JBL 305P is a powered 5″ studio monitor. That means they’re simply plug-and-play, and don’t require an external power source like passive speakers do. At $149 each, they’re of the more affordable monitors out there too, making them a highly competitive choice.

On paper, the JBLs are representative of what you’d find in this category. That is to say, the specs are right in line with most 5″ monitors in terms of frequency response, as well as additional features. One thing that sets these apart is JBL’s patented Image Control Waveguide, which is a fancy way of saying the 305Ps have a wider sweet spot than most speakers. Regardless of the size of your room or how unusual your set-up may be, these monitors promise spacious stereo imaging and accurate playback.

HF Trim and Boundary EQ are helpful inclusions that let you compensate for room deficiencies or personal preference. The boundary EQ lets you cut the low-end if there’s any unnatural buildup, while the HF trim lets you boost or cut around 10kHz. Low frequencies extend down to 43 Hz at -10 dB, becoming more audible and accurate at 49 Hz. That’s plenty of low-end for most people, and JBL’s patented Slip Stream port ensures superior bass performance at any volume. Still, some users may want a sub to really rattle the room and find out what’s happening in the depths of their mix.

The overall sound quality is great for an affordable and reliable home studio monitor. There’s a good compromise between fun and critical listening on these speakers that comes from a nice little high-end lift. Brighter instruments have a tendency to come forward and sound very present.

Anyone shopping for their first pair of speakers would likely be very pleased with the JBL 305P MkIIs. One of the biggest drawbacks is audible hiss at low volumes, which becomes masked at medium to high levels. 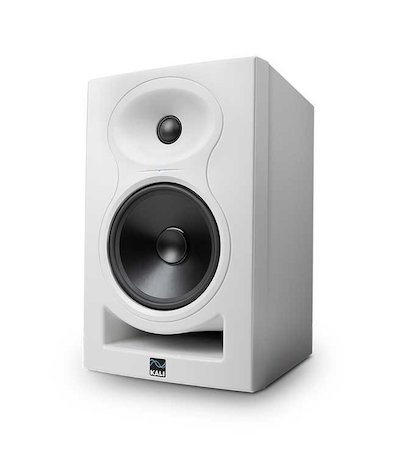 Kali Audio‘s “Project Lone Pine” LP-6 is a pair of inexpensive studio monitors much like the JBL 305s. The LP-6 is a 6.5″ powered speaker. The tweeter design on the LP-6s is similar to that of JBL’s patented one, offering a 3D listening experience and sweet spot not unlike the ultra-wide one that Image Control Waveguide provides.

Where the Kali LP-6 really stands out is with the detailed set of dip switches to EQ the speaker for a variety of listening environments and placements. There really is a ton of flexibility in tuning the monitors for the exact set-up you have. As far as sound quality goes, the Kalis feel a little smoother and richer than the JBLs because of a small lift between 500 Hz and 1000 Hz. The low-end also feels a bit tighter, though the JBL’s imaging is more precise and expansive overall.

For what it’s worth, the Kalis suffer from the same hiss as the JBLs, but it becomes unnoticeable at higher volumes.

JBL’s LSR305 speakers were the long-running precursor to the 305Ps. They’ve now been discontinued, but can still be picked up on the used market. In terms of performance, the LSR305 is virtually the same speaker as the 305P MkII!

The 305P is an excellent entry-level monitor. The imaging is some of the best-in-class, and the soundstage feels bright and energetic. Compared to some of the other choices in the same price range, the JBLs would really be a matter of preference.