Apple’s pulled the iOS 15.1 update out of beta and it’s now available to download.

Check Out These Huge Holiday Discounts on Samsung Products

Unlike the previous version of iOS 15 (iOS 15.0.2), iOS 15.1 is a milestone upgrade and it’s a much larger update than its predecessor, iOS 15.0.2. It brings a mix of new features, fixes, and enhancements to the iPhone.

With that in mind, we want to take you through everything you need to know about Apple’s new iOS 15.1 update for iPhone.

In this walkthrough we’ll take you through all of iOS 15.1’s changes, the software’s performance, iOS 15.1 problems, the iOS 15.1 jailbreak status, and more.

We’ll start with some quick thoughts on iOS 15.1’s performance.

For iOS 15.0.2 users, the iOS 15.1 download is fairly large. It’ll likely be a 1GB+ download for iPhone users moving up from the previous version of iOS 15.

The exact iOS 15.1 download size depends on your iPhone model and the version of iOS it’s currently running. So if your iPhone is running an older version of iOS, you’ll see a bigger download because your iOS 15.1 update includes the changes from iOS updates you skipped.

If you’re moving up from iOS 15.0.2, the installation process should take less than 10 minutes to complete. It took about seven minutes to install on an iPhone X that was previously running iOS 15.0.2.

For more on the iOS 15.1 download and installation, take a look at our guide. 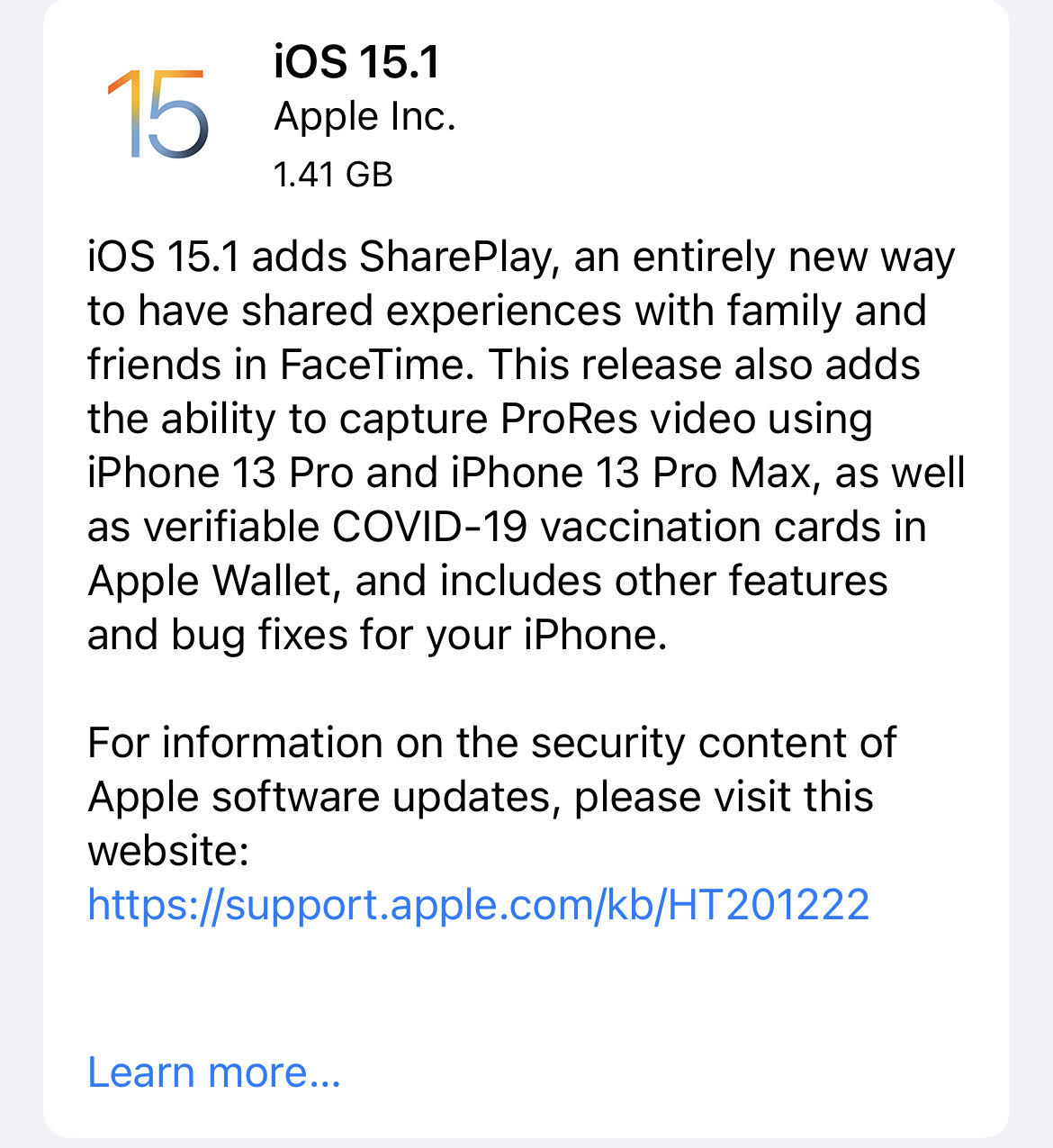 We’ve been using iOS 15.1 on a few iPhone models for several days and here’s what we’ve learned about the software’s performance thus far:

If you’re running into bugs or performance issues on iOS 15.0.2 or an older version of iOS, you might want to install the iOS 15.1 update on your iPhone right now.

If you need help making a decision, please check out our reasons to, and not to, install iOS 15.1.

iOS 15.1 is causing problems for some iPhone users. Some of these problems are brand new, others have carried over from iOS 15.0.2 and older versions of iOS.

Apple stopped signing on iOS 15.0.2 which means you can’t drop your phone’s software back to the previous version of iOS 15 if iOS 15.1 is causing problems. You can’t downgrade to anything older than iOS 15.0.2 either.

For more on the downgrade process, check out our guide.

iOS 15.1 is a milestone upgrade, the first for iOS 15, and it brings some notable changes to the iPhone. Here’s the full list of changes on board:

SharePlay is probably the most notable change on board and Apple’s been touting the number of third-party applications that are compatible with the feature. Compatible apps include NBA, TikTok, Twitch, Paramount+, and Showtime.

iOS 15.1 also brings 12 security patches to iPhone and you can read about those right here.

The newest version of unC0ver is compatible with newer iPhones including the iPhone 12 series. That’s big news if you’ve been waiting to jailbreak your new phone. Unfortunately it’s only compatible with versions up to iOS 14.3.

There’s no way to downgrade your phone’s software to iOS 14.5 or older versions of iOS which means you’re out of luck if you upgrade, or you already upgraded to newer iOS software.

Apple’s confirmed a new version of iOS 15 and iOS 15.2 is currently in beta ahead of its public release. The company hasn’t confirmed a specific release date yet, but it should drop sometime before the end of the year.

If your problems on iOS 15 are really bad, or you just want to try new features, you can download the iOS 15.2 beta onto your iPhone right now.

For more on iOS 15.2 and the beta, have a peek at our walkthrough. For more about the iOS 15.2 release date, check out our guide. 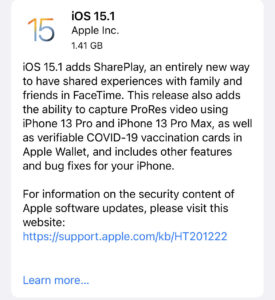 If security is important to you, you’ll want to think about installing Apple’s iOS 15.6 update right away.

The iOS 15.6 update has 30+ security upgrades on board and they are essential if you want to keep your device and its data protected. You can learn more about them right here.

If you missed iOS 15.5 it brought 27 new security patches to the iPhone. You can learn more about these patches over on Apple’s security site.

If you missed iOS 15.4.1, it had just one new security patch on board. You can read more about it over on Apple’s website.

If you missed the iOS 15.4 update, it had a whopping 36 new security patches on board. If you want to learn more about these patches, head on over to Apple’s security site for the particulars.

If you missed iOS 15.3.1, it had one security patch on board. For more about it, head over to Apple’s security page.

If you missed iOS 15.3, you’ll also get its patches with your upgrade. iOS 15.3 brought 10 new security patches to iPhone users. If you’re interested in the details, you can read more about them right here.

If you missed iOS 15.2.1, you’ll get its security patch with your upgrade. You can learn more about the change over on Apple’s website.

If you missed Apple’s iOS 15.2 update, you’ll get its 30+ security patches with your upgrade. You can read all about them over on the company’s security site.

iOS 15.2 also included some important upgrades to privacy. The software brought the company’s App Privacy Report to Settings. This lets you see how often your apps have accessed your location, photos, camera, microphone, contacts and more during the last seven days. You can also see their network activity.

In addition, iOS 15.2 brought Apple’s communication safety features for kids. You’ll find these features in the Messages app, in Siri, in Spotlight, and in Search.

If you missed iOS 15.1, iOS 15.6 will bring its security patches to your iPhone. You can read more about them on Apple’s website.

If you missed iOS 15.0.2 you’ll also get its security patch with your upgrade. You can learn more about it right here.

iOS 15.0 also brought numerous security patches to your iPhone. If you’ll be moving up from iOS 14 and you’re interested in the exact nature of these improvements, you can read about them over on Apple’s security website.

If you skipped iOS 14.8 or any older versions of iOS, you’ll get the security patches from those updates with your iOS 15.6 update as well.

In addition to those patches, iOS 15 comes with some security and privacy upgrades including improvements to Siri. Requests made to Siri are now processed on the device itself using Neural Engine. This makes it more secure.

If you’re an Apple Card user, you’ll now get a security code that changes regularly to use when you make online transactions.

Apple’s also included a built-in authenticator that’s similar to Google Authenticator. This will let you generate verification codes for enhanced sign-in security under your Passwords.

There’s also a Mail feature that hides your IP address. 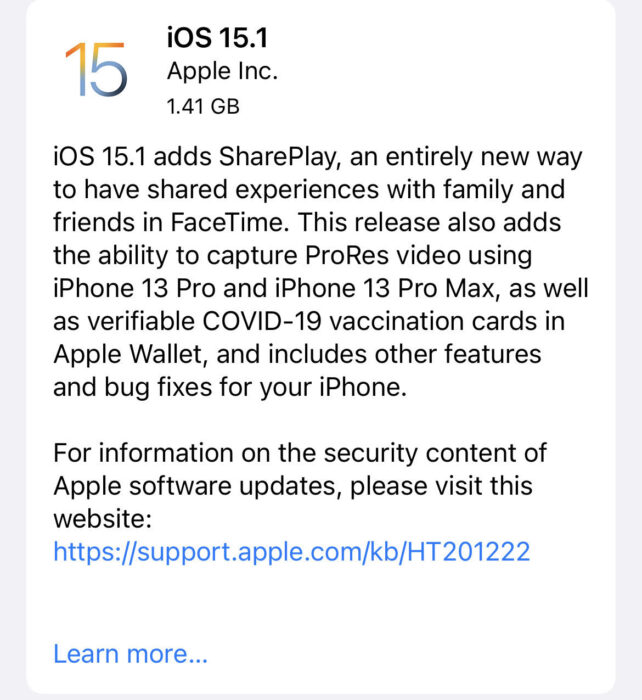 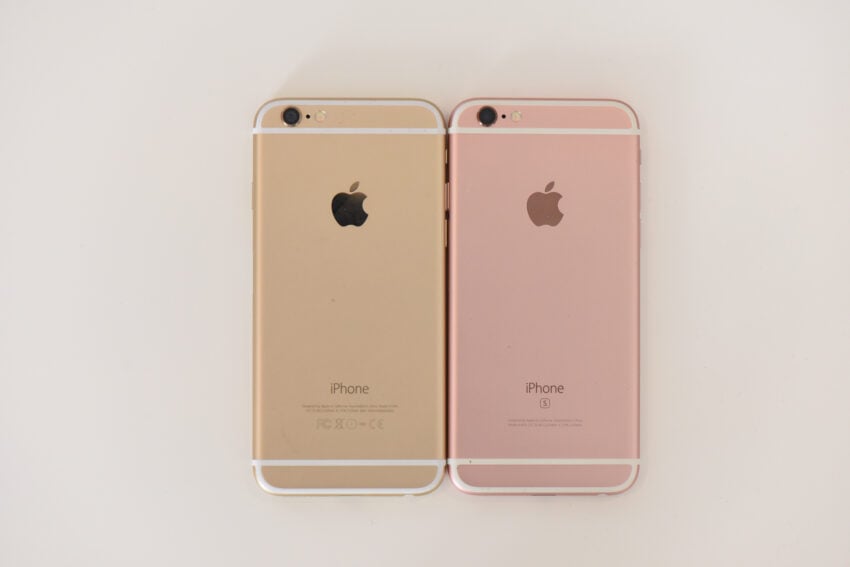