The Galaxy A70 was one of the best mid-range phones Samsung put on the market last year. The A70 had amazing battery life and was Samsung’s first mid-range phone to feature 25W fast charging. It also had a big and beautiful AMOLED display, good performance, and a flagship-like software experience. Samsung launched the Galaxy A70s a few months later with a higher-resolution main camera, and then came the Galaxy A71, made official in December last year.

The Galaxy A71 brings an excellent amount of upgrades over its predecessor. It has the new Infinity-O Super AMOLED panel like Samsung’s flagships, a newer, more efficient processor (the Snapdragon 730), a quad camera setup at the back that includes a 64MP primary shooter and a 5MP macro camera, and Android 10 with One UI 2.0 out of the box.

Is the overall package one that will satisfy those looking for a mid-range phone that doesn’t burn a hole in their pocket but still offers a high-end experience? Let’s find out.

Galaxy A71 design and display 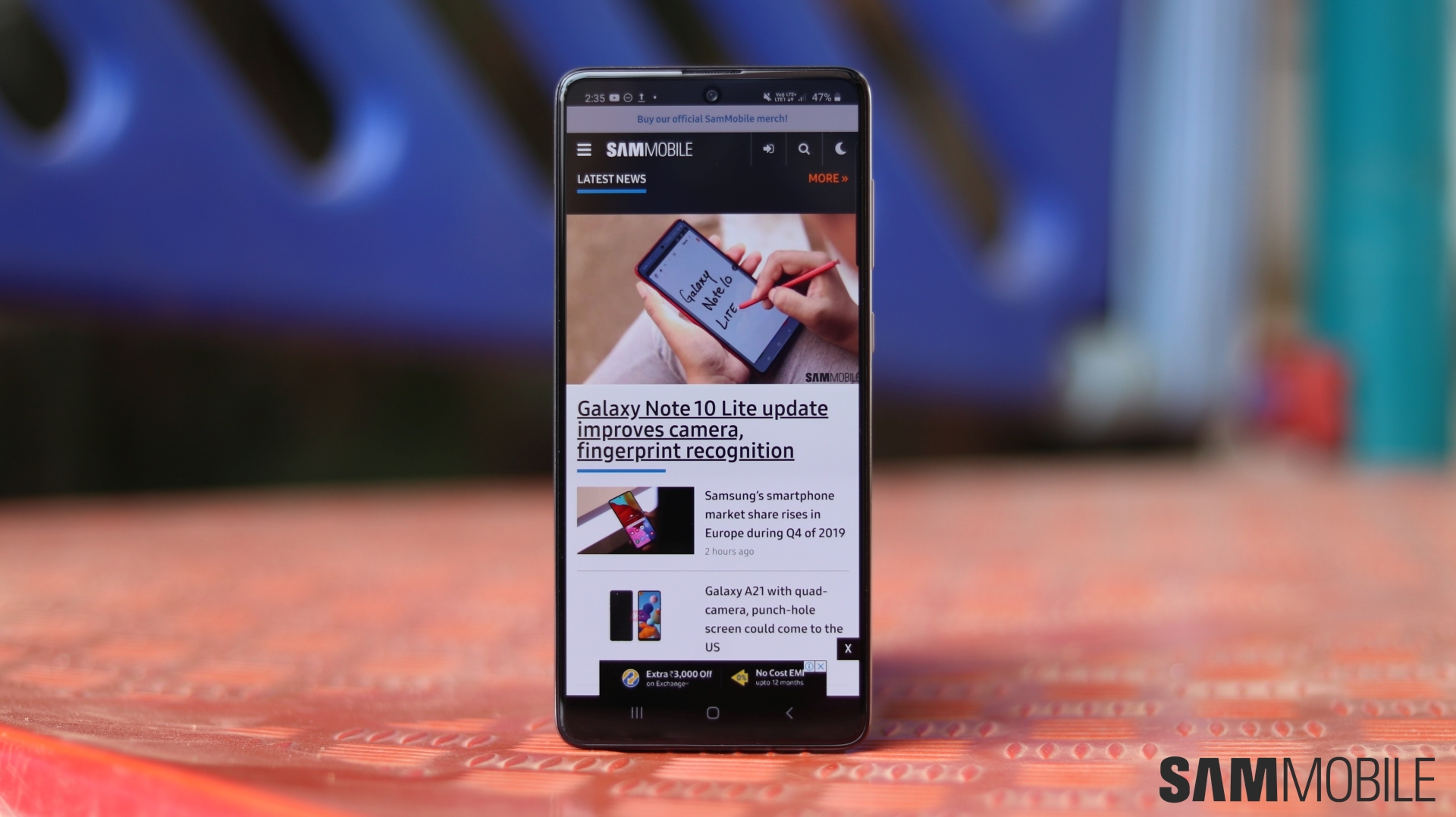 The Galaxy A71 is a pleasure to hold and use. Despite the 6.7-inch display and 4,500 mAh battery, the A71 is sleek and light. There’s plastic on the back, but the phone feels premium while not being slippery as a phone with a glass back. It also looks striking – the rear panel has thin stripes running from the top to bottom and a couple of lines running across diagonally. When the light hits the back panel, it creates a beautiful rainbowish pattern across those stripes.

The display is beautiful as well. All the AMOLED awesomeness is present: vivid colors (with the option to switch to a more natural look), deep blacks, wide viewing angles, and excellent brightness levels. Thanks to the Infinity-O screen, the bezels have been reduced, and the punch hole for the front camera looks better than the U-shaped camera cutout we saw on the Galaxy A70’s display. A smaller punch hole would have been nice, though. 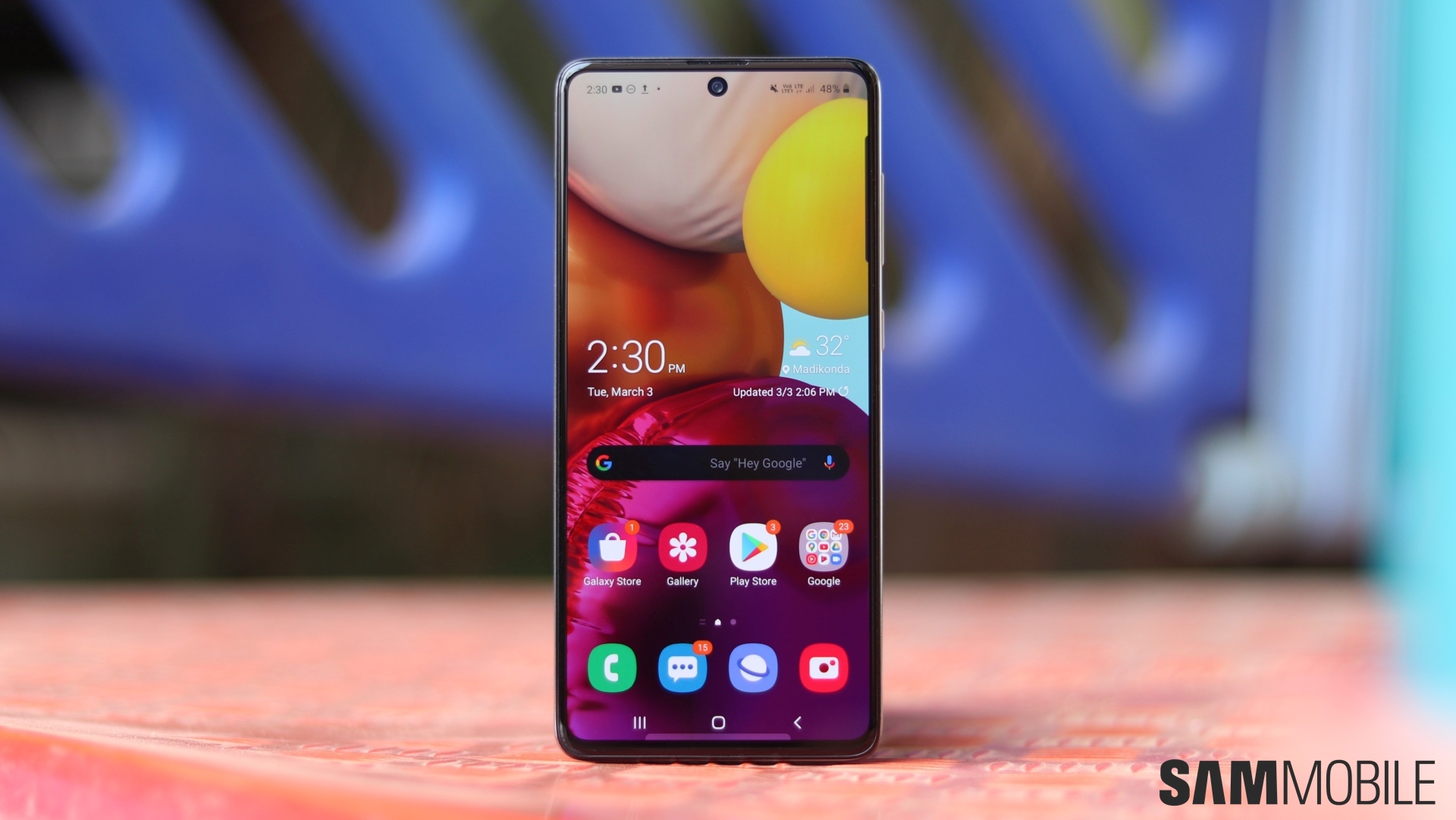 The in-display optical fingerprint sensor has been improved as well. It’s much quicker and more accurate than last year, even more so than the theoretically superior ultrasonic in-display sensor on Samsung’s flagships. Naturally, facial recognition is supported, and it works well most of the time. You get the option to add your face two times thanks to One UI 2.0, so it’s pretty easy to make sure the phone almost never fails to properly detect your face.

In the box, the Galaxy A71 comes with a 25W fast charger with a USB-C to USB-C cable and 3.5mm earphones. The A71 doesn’t have a screen protector applied out of the box, and a case isn’t bundled, either. The latter isn’t exactly necessary, though we would recommend getting both a screen protector and a case to keep this pretty little phone safe from everyday wear and tear. 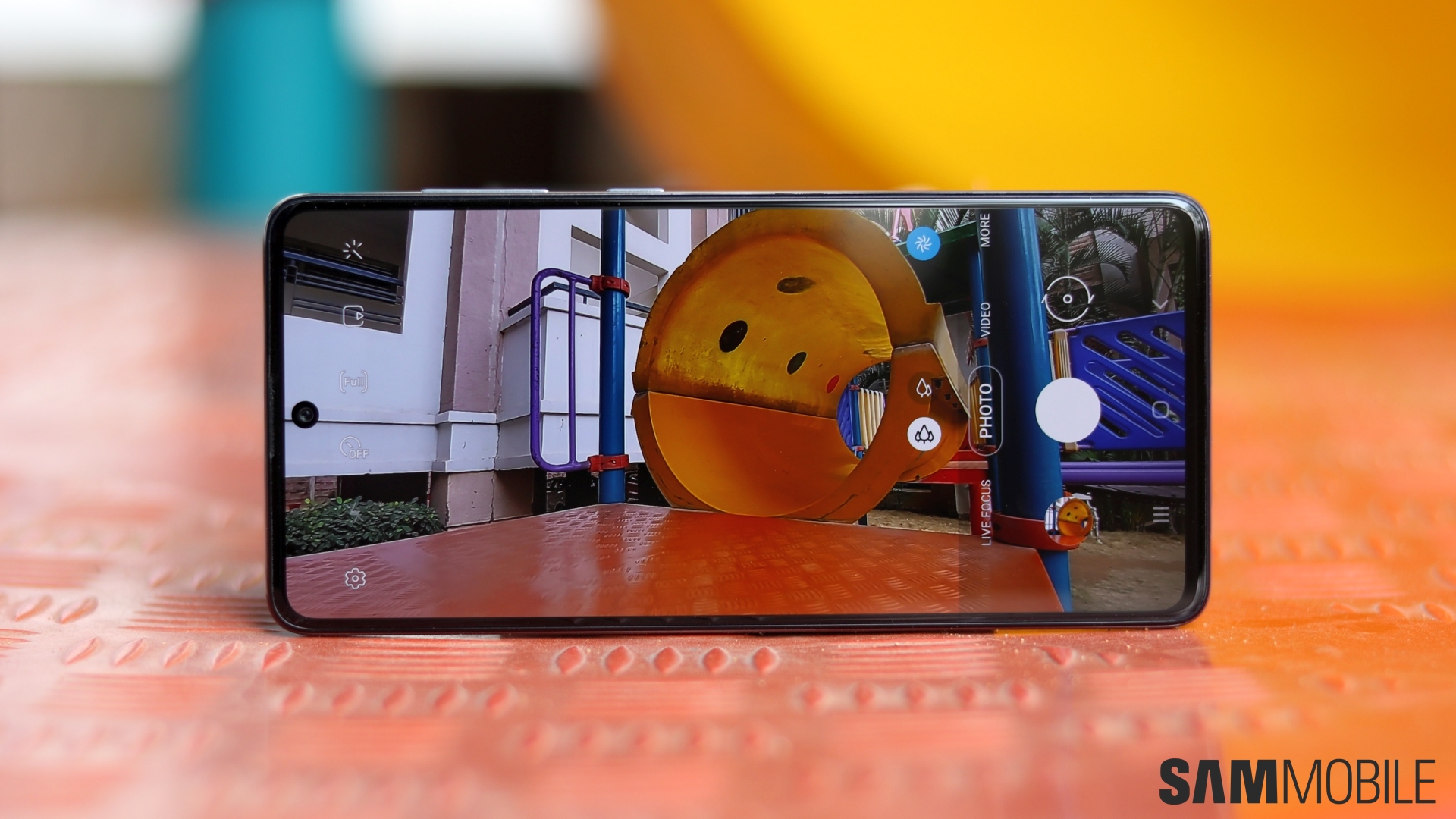 The Galaxy A71’s 64MP primary camera takes 16MP photos using pixel binning, and when the lighting is right, you get really beautiful pictures. There’s a lot of detail in daylight shots and good dynamic range. Color reproduction is also faithful to real life in most cases. Nighttime shots come out noisy/grainy, though, and the dedicated Night mode tends to focus on increasing the detail in dark objects rather than controlling noise levels. That said, with good artificial lighting, the photos are pleasing and look pretty good, at least on the phone’s display. Bokeh shots using the Live Focus feature also look excellent thanks to the high-resolution sensor. 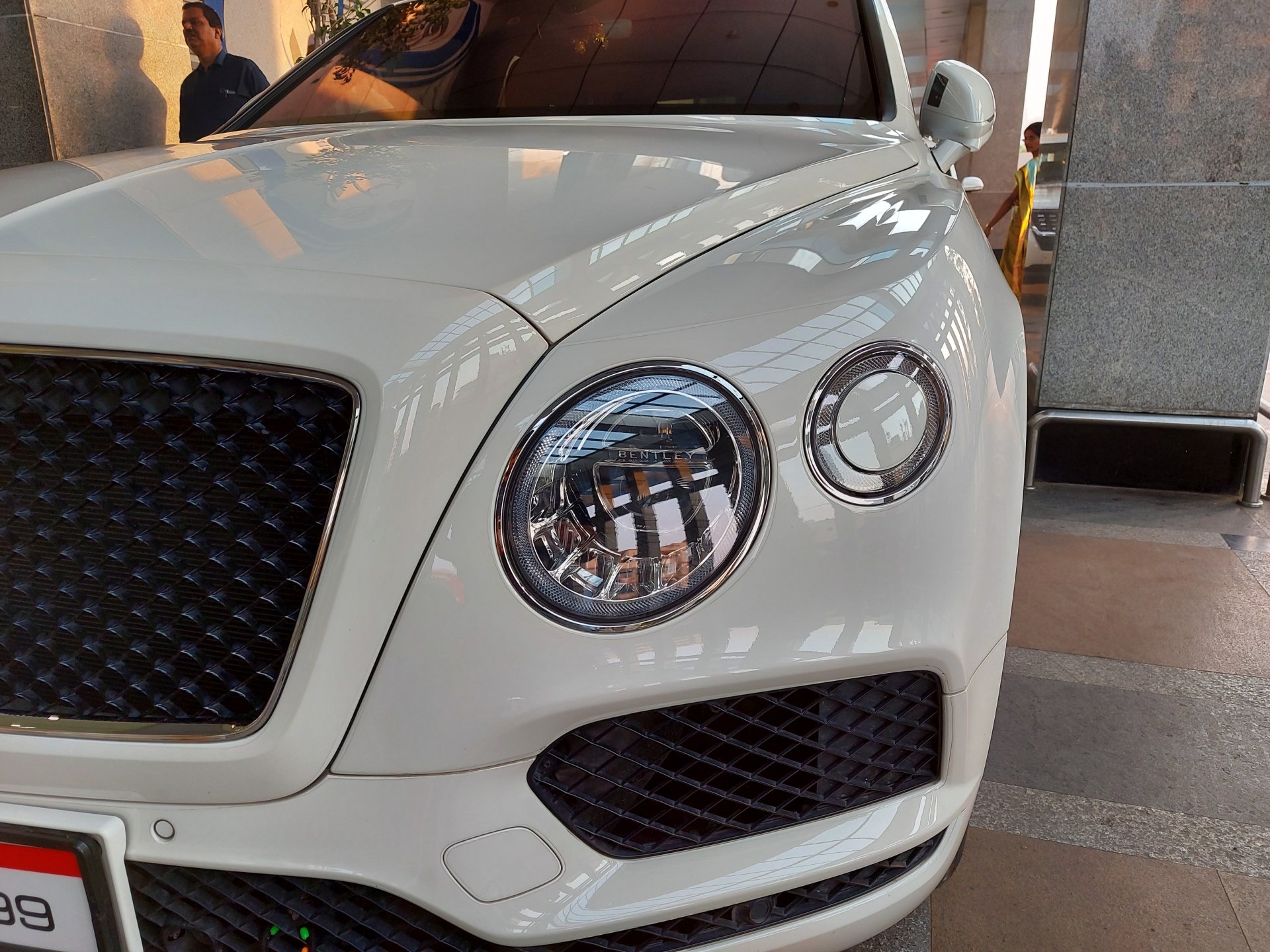 The 12MP ultra-wide camera takes better photos that what the 8MP ultra-wide camera on the A70 was capable of, at least in terms of the detail captured. The A71 also has a 5MP macro camera that’s barely serviceable. I hope Samsung will start putting higher-resolution camera sensors in its upper mid-range devices, as the 5MP sensor barely resolves any detail no matter how good or bad the lighting may be. That also makes it tough to get focus right, unless you’re looking closely at the screen while framing a macro shot.

Below are a few samples from the main camera, the macro camera, and the ultra-wide camera. Pictures taken in auto and Night mode are next to each other, and so are the photos taken with the regular and ultra-wide cameras. At the end of the gallery, you can see a couple of Live Focus bokeh shots.

In addition to Live Focus, the Galaxy A71 supports the Galaxy Note 10’s AR Doodle feature, Super Slow-mo and regular slow motion video recording, and 4K video recording at 30 fps. The Super Steady recording mode, which uses the ultra-wide camera and crops part of the frame to replicate smooth video, is present as well. AR Emoji and Bixby Vision are also supported, and so is a basic Pro mode that lets you customize parameters like ISO and white balance.

For selfies, the 32MP front camera gets the job done with above-average detail and fairly accurate skin tones. Live Focus selfies have pretty good separation of the subject and the background. The usual issues with blurring around hair are still there, though you would be hard-pressed to notice those on the phone’s screen. 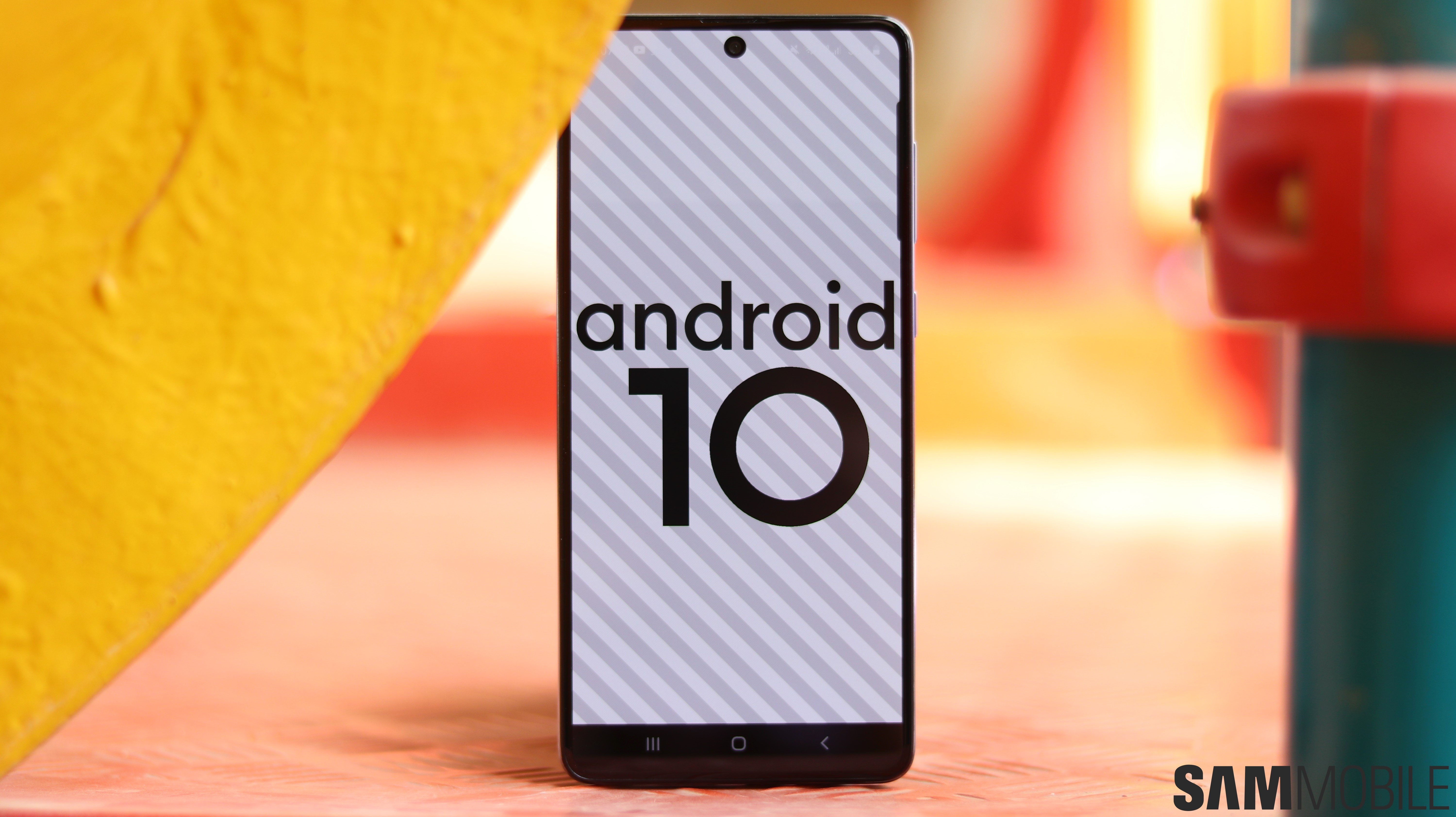 The Galaxy A71 has all the fancy Android 10 and One UI 2.0 features that you find on Samsung’s flagship phones. The built-in screen recorder let you record on-screen content with a single tap, Bixby Routines lets you automate various tasks on your phone, and Edge screen lets you quickly access apps and other functionality by swiping in from the edge of the display. You also get full Samsung Pay support.

Other features, like Link to Windows for one-touch connection to Microsoft’s Your Phone Companion app on a PC, side key customization to select what the power key does on a double or long press, and Game Booster for various in-game functionality (such as changing whether the phone focuses on performance or power saving) are also present. Standard Galaxy features like Dual Messenger, themes support, and Always On Display are included as well.

The only problem is the fact that Samsung preloads the phone with some unnecessary apps. The pool game you see in the photo below (in the performance section)? That was preloaded on the phone, and so were Candy Crush Saga and apps like MrOwl, Helo, and DailyHunt. You can uninstall all of these apps, but I don’t understand why they are preloaded on a phone that isn’t priced as aggressively as more affordable Samsung devices (like the Galaxy A51 and Galaxy M31).

The Galaxy A71 will get security updates every three months, which is standard fare for most of Samsung’s mid-range phones. You can expect two major Android OS updates (Android 11 and Android 12), with the first arriving sometime next year if the Galaxy A70’s Android 10 release schedule is anything to go by. 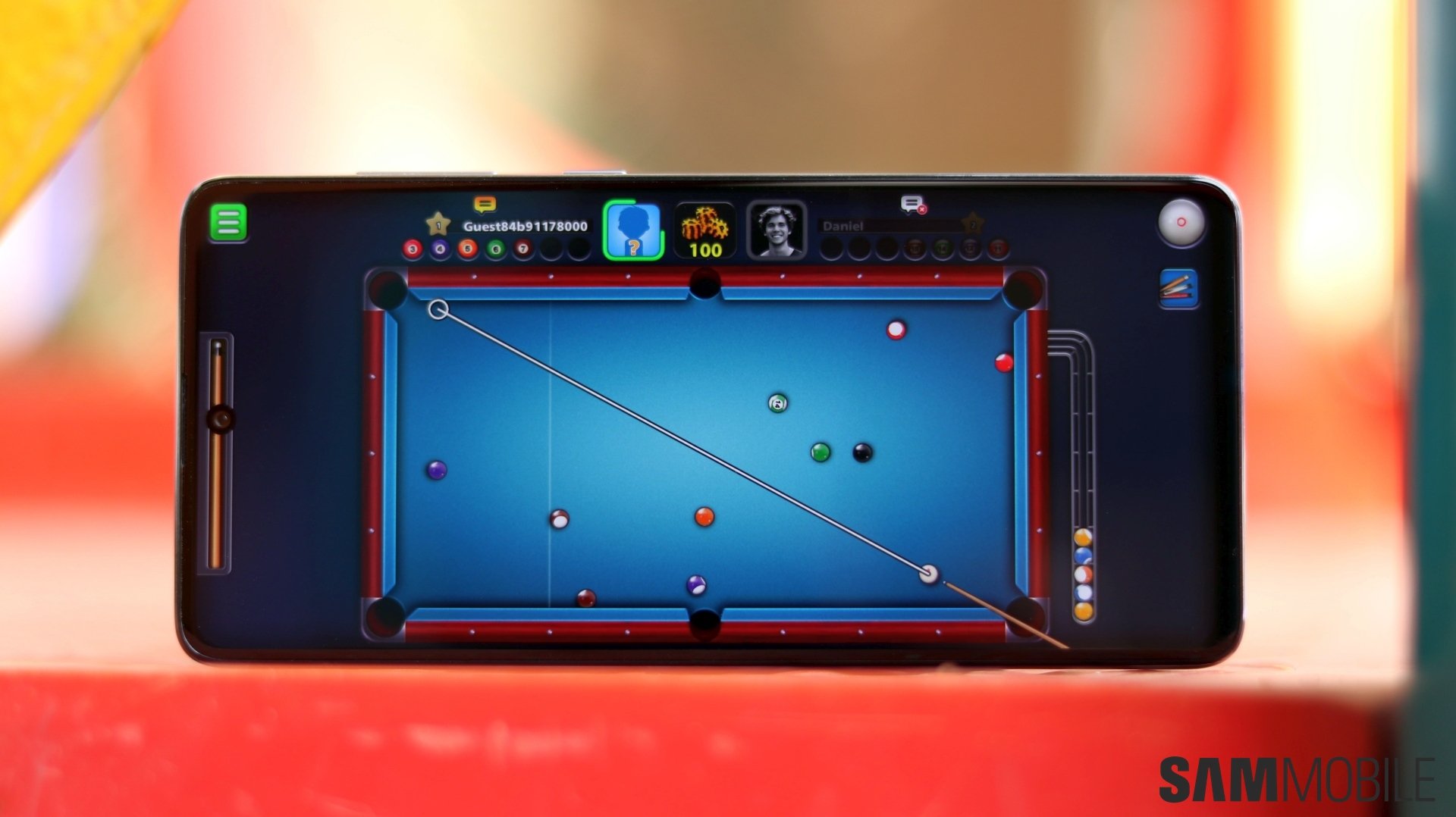 The Snapdragon 730 is one of the better mid-range smartphone chipsets out there, and it’s a great match for a device like the Galaxy A71. Performance in day-to-day use is excellent. There’s barely any stutter or lag to be seen, and all of the graphically intensive gaming titles — including ported PC games like Life is Strange – run well.

In fact, gaming performance is where the A71 brings a substantial boost over the Galaxy A70. The A70 was powered by the Snapdragon 675, which is equivalent to the Galaxy A51’s Exynos 9611 in terms of graphical prowess. However, for some reason PUBG Mobile doesn’t support the HDR graphics setting on the A71, and I hope that will change soon as the phone is perfectly capable of handling high-end graphics. 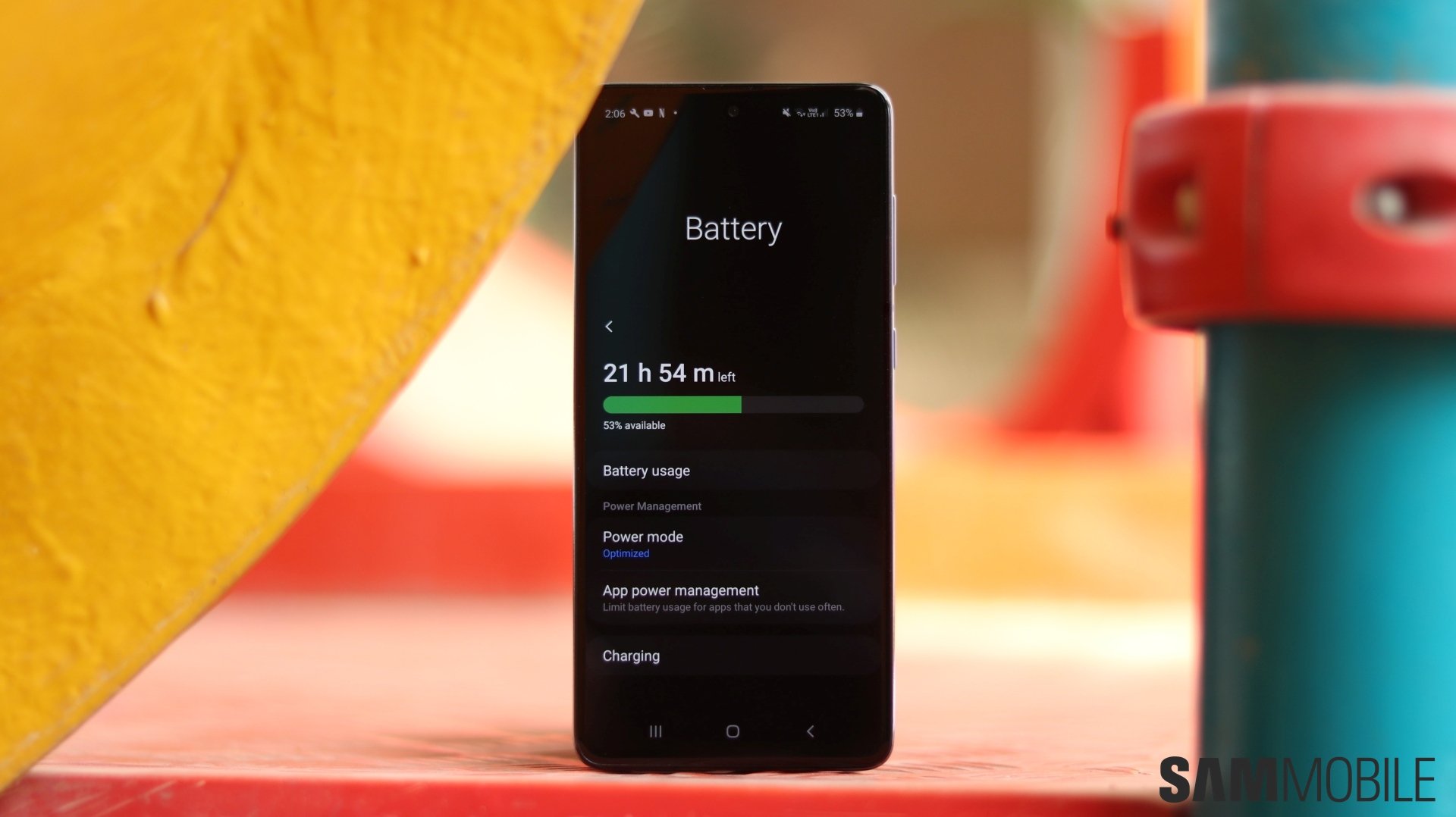 Still, it has impressive battery life and can get you up to two days on a single charge with light usage on Wi-Fi and a little mobile data, and a full day if you are a heavy user who tends to play games, watch YouTube videos and do other power intensive things on their phone. If you travel a lot, the A71 has excellent endurance even when used as a hotspot.

25W fast charging allows the A71’s 4,500 mAh battery to go from 0 to 100 percent in around 80 minutes. Starting at 1%, 10 minutes of charging tops up 18% of the battery and 30 minutes takes the battery charge to 50%. Standard 15W fast charging is supported as well, though there’s no wireless charging support (which isn’t surprising for a mid-range Galaxy smartphone these days).

Galaxy A71 audio and call quality 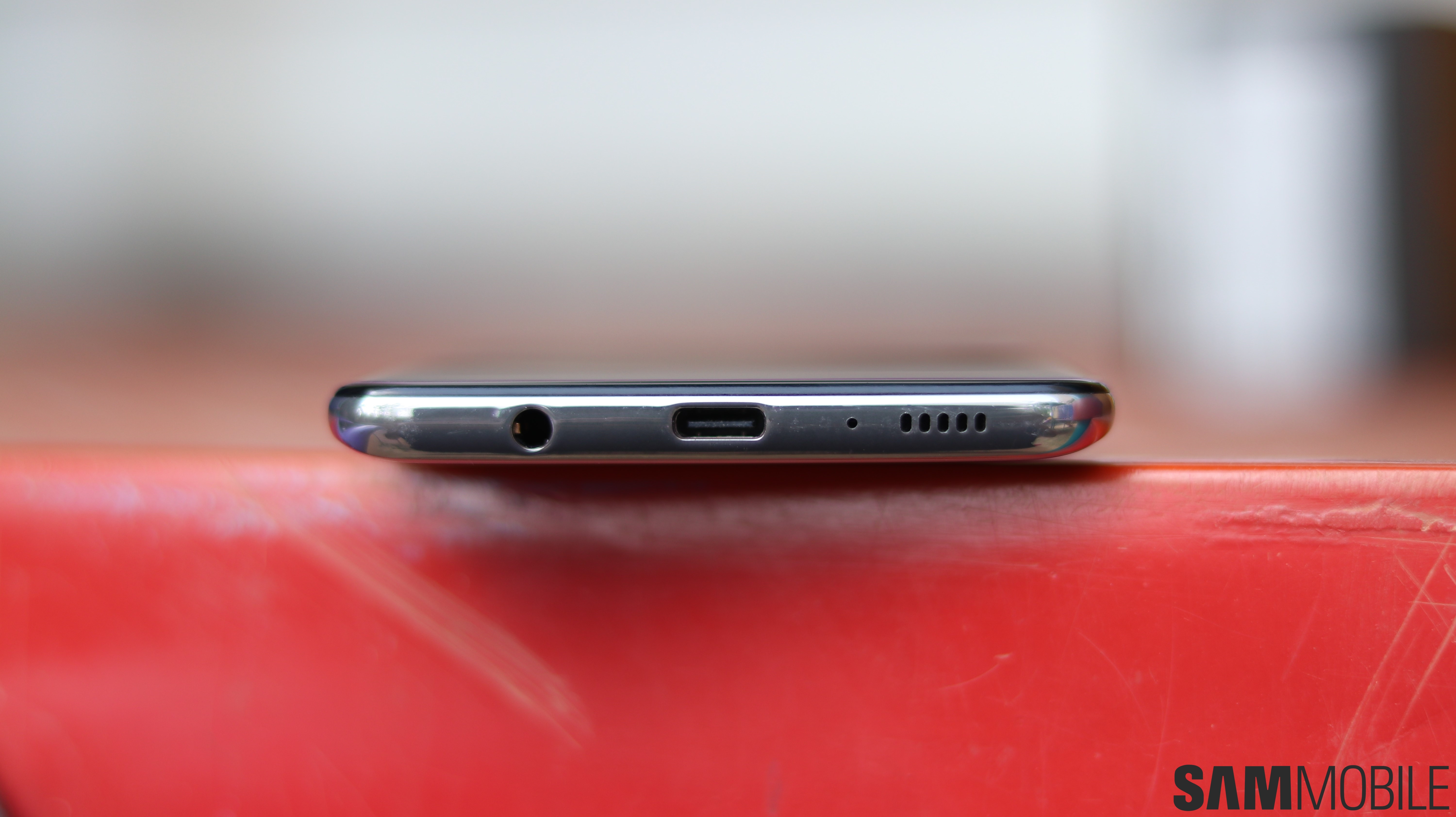 The Galaxy A70 had a frustratingly quiet loudspeaker, and unfortunately, Samsung hasn’t fixed that on the A71. Full volume is adequate for YouTube videos, but not for gaming and streaming apps like Netflix, making headphones necessary any time you’re not in a small quiet room. The speaker never distorts, but I’m not sure that’s a benefit when the volume levels are so low.

You do get Samsung’s usual mid-range earphones in the box, and the quality remains unchanged: A lot of treble, not enough bass, though enabling Dolby Atmos helps fix the latter to some extent. But hey, since there’s a headphone jack on this phone, you can easily swap the in-box earphones for a better third-party product. As for call quality and network reception, I have no complaints, and everything worked as it should. 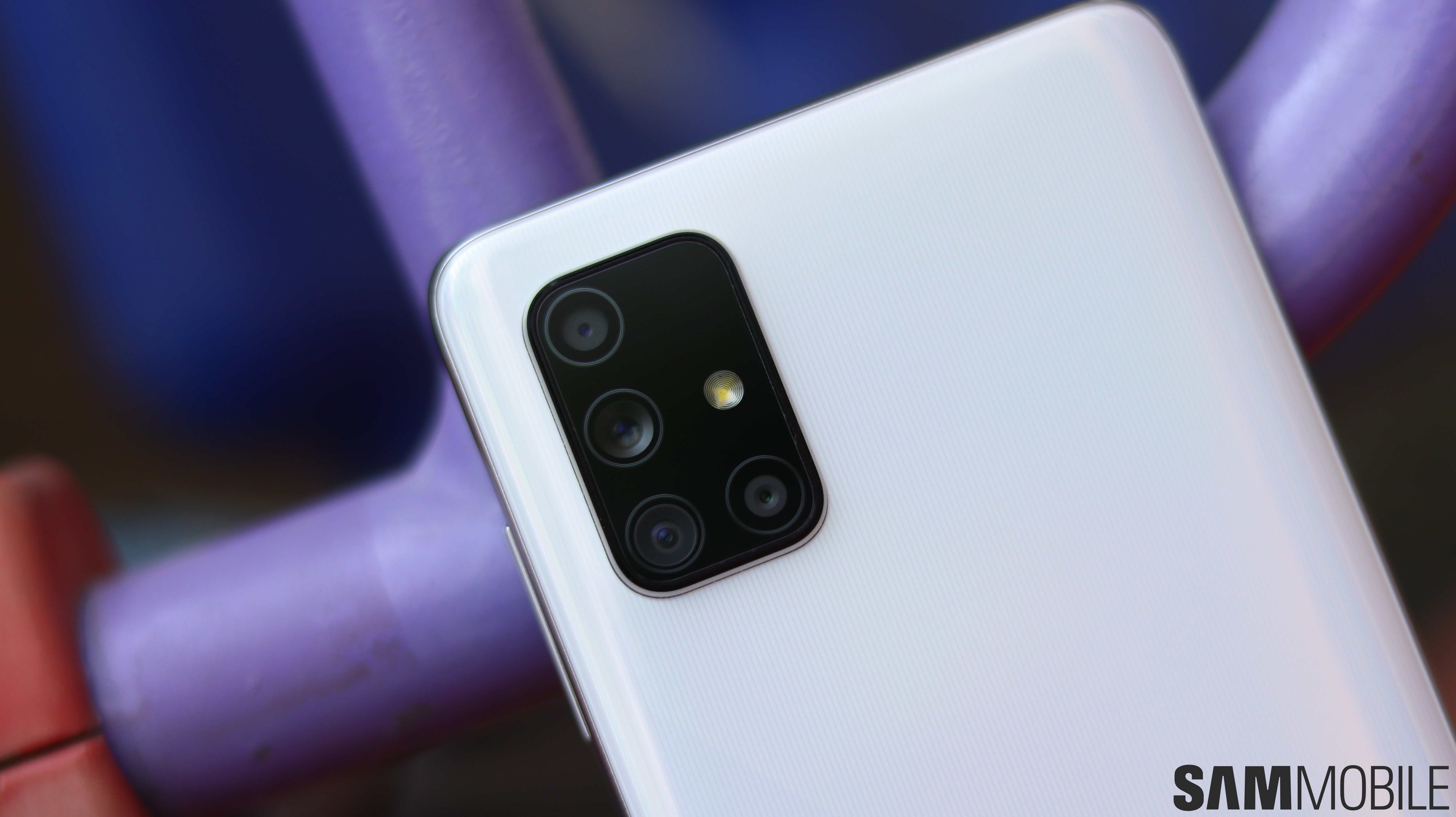 We loved the Galaxy A70, and the Galaxy A71 brings some neat upgrades. Its performance is notably better thanks to the newer Snapdragon chip, the display has been upgraded to an Infinity-O panel, there’s a higher-resolution main camera and a macro camera at the back, and you get Android 10 and One UI 2.0 out of the box. The A71’s design is excellent, and there’s not a lot it doesn’t do well.

A louder speaker would have been nice to see, and the low-light camera performance leaves something to be desired as far as noise levels are concerned, but these aren’t deal-breakers. A beautiful display, fast performance, mostly good cameras, crazy long battery life and equally fast charging, and the latest software make the Galaxy A71 a well rounded upper mid-range smartphone that you can’t go wrong with.

Snow White and the Seven Dwarfs