0
Chia sẻ
0
Lượt xem
Share on FacebookShare on Twitter
For those who listen with their ears and not their brain, perfectionist hi-fi offers many surprises.

A friend called me up a few weeks ago and asked if the DAC we both own had received an automatic firmware update he hadn’t heard about; something had changed, it wasn’t good, and he couldn’t figure out what it was. His system’s sound was suddenly pale and unfocused.

There had been no firmware update.

The next morning, he called me again. He’d remembered that, earlier the day before, he’d swapped out a meter or so of the standard Ethernet cable connecting his network switch to his DAC with an expensive, audiophile one.

This is not a review of an Ethernet cable or my friend’s ears or the science of subtle cognitive bias. It’s a review of Pass Laboratories’ XP-22 solid-state preamplifier ($9500). The relevance of this cable storyto which I’ll return in a momentis this: Lately, I’ve reviewed a lot of preamplifiers, and I’ve often found them to improve the sound of the system I’ve heard them in. Other reviewers have found the same thing. From a scientific perspective, this doesn’t make sense. Adding a preamplifieryet another active component, hence more noise and distortionshould not improve the sound of an audio system, but degrade it. Any improvement seems almost as unlikely as a network cable dramatically altering a system’s sound.

By the time my friend figured out what was going onor what he thinks was going onhis system was sounding “glorious,” he said: better than ever. If his ears and brain are to be trusted, not only did that network cable dramatically change his system’s sound, it also “broke in” over those first few hours of use.

The scientist in me finds this story incrediblein the sense of lacking credibility. My friend, though, is a solid guya scholar, a technical professional. Was expectation bias at work? Maybe. But consider that his expectations were at first so low that he hadn’t even remembered he’d swapped out the cable. He obviously wasn’t listening for a big change. But that’s what he heard. I knowcrazy, right?

Poets, art historians, and musicians may find such stories easier to swallow than do former physicists (like me) and engineers. To those of us who like to think, rightly or wrongly, that we have some insight into what goes on inside an audio system at a mechanistic/electronic level, such experiences are mind-blowing. They can cause us to mistrust our own experiences, let alone the experiences of others.

Skepticism about our own perceptions is healthy and can save us money, but too much skepticism is bad for subjective reviewing: If it’s true that we hear what we expect to hearand to some extent it is truethen it’s equally true that we can, in marginal cases, fail to hear what we expect not to hear. Furthermore, to continue to doubt yourself when faced with convincing if statistically inconclusive evidence strikes me as not especially good for happiness and mental health. Explaining away your own perceptions starts to seem less rational than embracing them.

But never mind that. I’ve got a preamplifier I need to review.

Pass Laboratories XP-22 That a preamplifier can improve the sound of a system relative to the same system without a preamplifier is mysterious, but there’s nothing intrinsically mysterious about a preamp. Its functions are straightforward, as are its means of performing those functions: some relays or switches to choose a source, a variable resistor or some other technology to adjust the volume. Shift the signal from side to side with a balance control. All of these things can be achieved via straightforward electronic principles.

The Pass Laboratories XP-22 is a two-box preamplifier, one box containing its dual-mono power supplies, the other its signal-path electronics. These cases are connected via a robust umbilical described by Pass Labs as “aviation-grade.” On the rear panel are two balanced (XLR) and three unbalanced (RCA) inputs, plus a tape loop (RCA). There’s a home-theater bypass on input 5. The two outputsone balanced (XLR), the other unbalanced (RCA)can be used simultaneously. The left/right balance can be adjusted using the provided remote-control handset, a chunky metal slab that duplicates all front-panel controls, and then some. 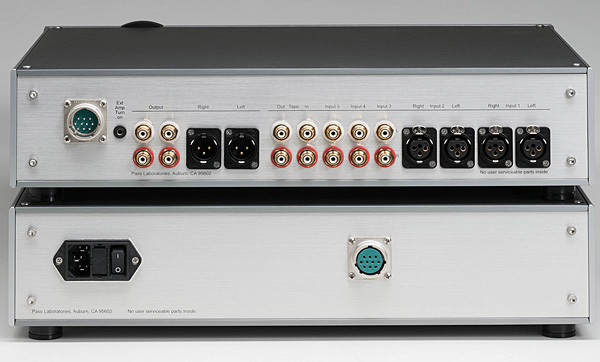 My 55-year-old, presbyopic eyes can read the big blue characters on the XP-22’s display from my listening chair, without glasses. Volume is displayed for the left and right channels separately. That display can be dimmed or turned off via the remote control or a button on the front panel. Then, when you change a settingsay, the volume or the inputthe display comes back on for a few seconds before turning off again. I like this feature, though it’s not, I think, unique to this preamp or Pass Labs.

The XP-22 is handsome, with a robust, sturdy look, but those looking to make a colorful fashion statement should turn elsewhere: Pass Labs’ preamplifier designer, Wayne Colburn, said that the XP-22 is availableold joke alert”in any color you like as long as it’s instrument gray.”

The XP-22 will replace the XP-20 in the Pass Labs lineup; the older model ($8600), remains in the line for now. Colburn told me that the XP-22’s circuits are actually closer to those in Pass Labs’ pricey, top-model line preamp, the Xs ($38,000), than to those in the XP-20. Like the luxury Xs (get it?), the XP-22, Colburn said, uses cascoded JFETs in a patented “Super-Symmetric” topology, with output MOSFETs (footnote 1) heavily biased into a constant class-A by an optically isolated controller”ie, an optocoupler. “We use an optically isolated transistor in the output bias circuit for a couple reasons,” Colburn said, “the first being that the transistor is isolated from any input control signal, so there are no artifacts from such a connection, and also because the LED which controls that transistor has a consistent voltage characteristic which is also free of thermal drift.”

The XP-22’s circuits are more heavily biased into class-A than its ancestor the XP-20. “The higher bias in the output FETs lowers the distortion a bit, and some additional tweaking managed a few dB less noise,” Colburn told me. A single-stage volume control, featuring an Avago-sourced encoder with good bearings and a nice feel, lowers the parts count. (The XP-20 has a two-stage controller.) Colburn said it’s the same volume control used in the XP-30, Pass Labs’ costlier three-box preamplifier ($16,500), which John Atkinson reviewed in the April 2013 issue.

All of these changes render the XP-22 “quieter and more dynamic than the XP-20,” Colburn said. “We experience these improvements as offering a better sense of space and improved dynamics.” Still, Colburn didn’t try to oversell the XP-22’s upgrades. “The sonic differences between the older and new designs are fairly subtle,” he told me. “We are simply making the product incrementally better.”

Tweakers be warned: The XP-22’s owner’s manual includes this note: “We can’t guarantee that your audiophile grade fuse, won’t blow at a different in-rush current threshold, than your stock commercial fuse. Use of other than approved fuses, may invalidate your product warranty and result in product damage.”

Footnote 1: All transistors are new-old-stock Toshibas, “which have long been a reference standard for quality in high end audio,” Colburn wrote in an e-mail. “They were discontinued years ago, but we made large purchases and continue to use that inventory to produce the best possible products.”